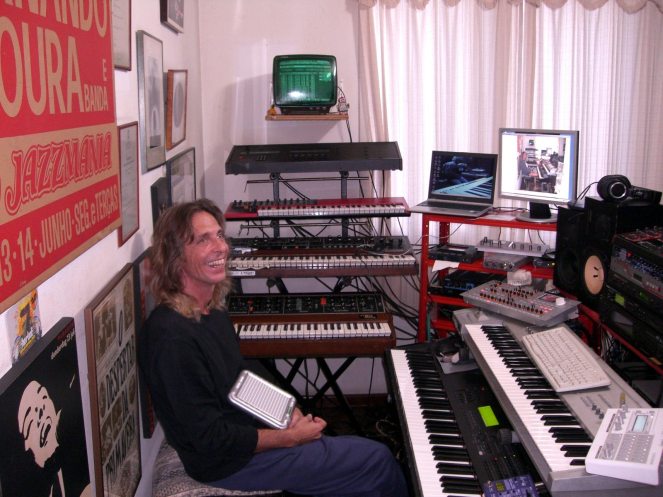 Hi Fernando. You are a well-known soundtrack and record producer in Brazil and also a respected instrumentalist. Can you tell us a bit about your history?

I´ve started playing piano at the age of 5 even without a musician in my family. My father used to hear bossa nova and jazz Lps at home all the time. Cesar Camargo and Oscar Peterson. At the primary school, my teachers were so impressed with my performances in front of the small children´s school band that they´ve recommended me to a local piano teacher. From there, I went to Brazilian Music Conservatory where everything was fine until seduced by the composition appeal I was censured by my teachers while improvising new melodies in top of Chopin´s Preludes harmonies at those grand pianos that were a real musical trip during my musical adolescence.

Through Keith Emerson, Rick Wakeman and Jon Lord I could see a connection between classical music and rock at the same time that discovering Miles Davis´ Kind of Blue at American Consulate Library was a revelation for me.

As a professional musician and arranger during the 80´s and 90´s I´ve worked both live and in studio with many Brazilian popular artists such as Moraes Moreira, Zé Ramalho, Francis Hime, Marisa Monte, Elba Ramalho and also with foreigners such as Steve Hackett (from English band Genesis) George Martin and Chuck Berry when they´ve visited Brazil.

At this time, I´ve started to collect hours of experience at different studios dealing with a large range of gear from Ampex three channel analog machines, then to 8, 16, 24 track analog recorders, ADATS and started to follow Midi and digital recording technology since my first Atari ST.

From 1995 thru 1997, I´ve studied music for cinema, tv and multimedia in Britain and when I came back to Brazil, I went deep in the instrumental and authorial music world beside building a career as soundtrack composer and producer.

Since 1998 I´ve been working with Japanese artists with much collaboration in records and CDs released there. More details at MySpace (https://myspace.com/fernandomoura).

At the moment my authorial efforts are concentrated mainly on “CosmeDamião” an acoustic piano and percussion duo with percussionist Ary Dias (http://www.youtube.com/watch?v=VS_inlCiYUk&feature=player_embedded). Brazilian music from many different sources is combined with organic grooves, lush harmonies and soundtrack moods opening spaces to improvised and written music. Please check it out at: (https://soundcloud.com/fernandomoura59/afro-bebe-bonus-orch). Playing live in Brasil we are experiencing warm reactions to this live and organic music which makes a perfect balance for my studio work.

Regarding your musical work, what do you have to offer to other members of M2D that is unique?

More than thirty years of experience and still technically updated and aesthetically refreshed. I travel to Japan to work there at least once a year and also take part at events like AES annual Convention and Producer Live Sessions (England) where exchanging ideas in person with artists from all over the world give me a willing to experiment which I think it is the artist´s food. Music today is very much about been capable of quickly produce original options to satisfy the increasing demands of the clients.

The Web brings to us a fascinating possibility of collaborate and interact with artists around the globe but sometimes I feel that some people are more likely to sell their products than to buy or to exchange. My point is to improve artists´ collaborations thru Music2Deal where each one can bring his or her best to the party and this way make it unique and profitable.

Let´s take a simple situation: a soundtrack for a corporate video for a sporting goods company talking about the World Cup or Olympic Games in Rio de Janeiro. As a real carioca (born in Rio) musician I can provide authentic rhythm tracks performed by some of the best Brazilian players and lush piano harmonies that can be combined for example to English guitar solos, Japanese rhythm programming, American brass sections or soloists, African rappers… Endless combinations and possibilities. I do feel that Music2Deal members should think about this type of interacting because this is clearly the future for independent musicians, instead of trying everything alone by themselves. Let´s face it: no one is good enough to be the best option at all duties in the musical process. Also the world is already full of “ jack of all trades”  locked at small rooms in front of a computer screen dreaming to be invited to make soundtrack to Hollywood films or to write the next R&B hit! Collaborating and listening to other musicians is a much more effective way of being successful and happy with your music these days.

What led you to participate in Music2Deal? What do you see as the platform´s differential?

I would like to thank my friend and multi talented sound engineer Rodrigo Castro Lopes’ for inviting me to know about Music2Deal. We recently did a great job recording a CD for legendary Brazilian guitar player Lanny Gordin (http://youtu.be/rSFWE02U2-s) where I did the arrangements, played acoustic piano and keyboards while he recorded and mixed the whole album and live shows. I feel that Music2Deal as a very promising association of musicians because it selects its proponents by the demonstration of expertise in the professional world of music. This can make a whole difference because the Web is already crowded by many offering cheap or even “free” music that has no quality at all or are unable to deliver some outlandish promises advertised just because there are no income guaranteed success in the music business. “How to´s” are generally a better incoming to people who sell books about being successful, but you seldom see a respectable musician or producer giving “success recipes” just because this is an illusion. No one knows how the audience will react to any kind of music product. No marketing plan or huge amount of advertising can assure a real success.

Creative work and collaboration can be rewarding and I do hope that Music2Deal will inspire and help to connect musicians all over the world to keep their independence and creativity at high levels.